A glimpse of Smart City 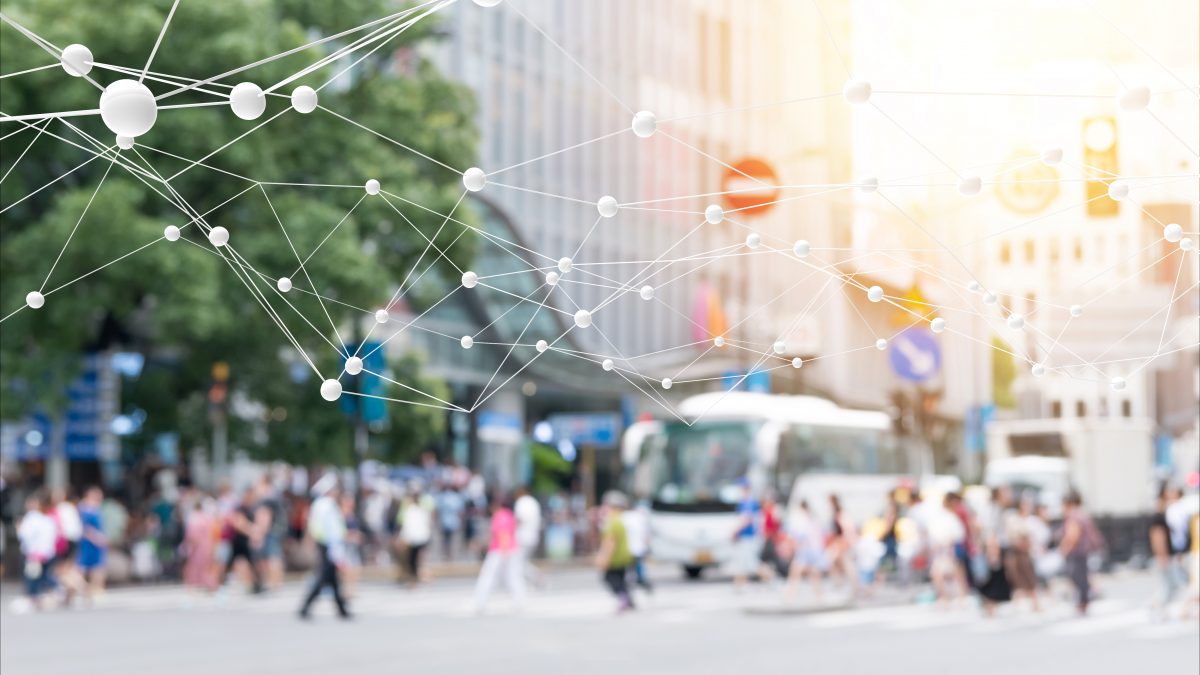 By 2050, 70% of the world population is likely to live in cities. Albeit, the footprint of cities only represents a few percentage of Earth surface area, but is a major contributor to pollution. Therefore, a legitimate quest is launched for optimizing resources and organization for the sake of the well-being of inhabitants. Hence, a concept of smart city aroused few decades ago and, by the same token, a technology fantasy that would revolutionize urban way of life inherited from thousand years of collective history. Is this reality? Lyon and Singapore will be providing a realistic glimpse of smart city in the course of this article.

City. Today, understood as an important town [1], originally coming from the French word, Cité, itself rooted in civitas, the latin description of a city-state [2]: a community of free citizens. Between Latin and English, the meaning has switched from the inhabitants to the place, and by the same token so does the understanding of city evolves over times and space. History is made. What about the future?

Smart city. A label encompassing a future vision of an improved city. It originates from a private-business led trend in the late 20th century, promoting the use of technology to improve urban life, and in the meantime creating a new commercial market. Marketing wise, “Smart” offers a wider shade of inspiration than its French counterpart “intelligent”. So much wider, that different points of views are controversial and therefore the notion itself of a smart city shall always be defined before arguing about it. It seems that “natural” intelligence has regained strength over the initial approach purely based on “artificial” intelligence, for the sake of the collective interest.

As a basic, a common understanding of the smart city concept would be the sustainability of the urban area, using collective intelligence with Digital technology as key enabler [3]. Either way, the topics covers larger areas of sciences (legal, social, computer science, biology, geography…), and a wide variety of applications (policy, infrastructure, health, education, mobility, energy, housing…). Let’s get a humble slice of it, looking at two footprints of the IRT SystemX in Lyon and Singapore.

So far away, yet so close? Both cities attend the Smart City Expo World Congress held annually in Barcelona [4]. A show where primarily territories compete for exposure hoping in return to get favor of investors, and possibly new citizens: in 2018, Singapore won the city award. Yes, smart city is also a business, at least in the “western” world.

SystemX had the opportunity to join the Lyon Metropole booth during 2017 and 2018 edition with different communication aspiration. Interestingly, SystemX was a contributor to both of them.

Co-construction. In the 2017 edition, SystemX featured its smart territory activities (an extended concept of the smart city) lying in mobility, energy and blockchain [5], while Lyon metropole smart-city communication strategy stressed on the “CO”, meaning collective, collaborative, partnership based, contributive, open, public-private-people etc. To this end, the booth highlighted 2 key components: Experimentation– Lyon urban area as a playground for experimentation and an Innovation Ecosystem, including dynamic companies, research institutes, collaborative places, fablabs… and last but not least citizens, as the core stakeholder. 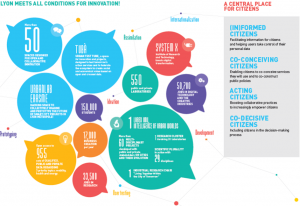 Truly so, the greater area of Lyon fosters distinctive smart city accelerators ranging from academics (i.e. labex), to start-ups (i.e. tuba) and industrials (i.e. Cara European cluster). In that respect, SystemX provided a true leverage for this dynamic ecosystem with its ability to build collaborative projects fostering innovation based on real use case scenario. As an example, the project definition of LCE (Lyon Covoiturage et Expérimentations) kicked off the same year, integrated Lyon’s will to include different partners to boost and test carsharing solutions over his territory [6].

Digital security. In 2018, Lyon metropole message focused on driving health and wellbeing for all citizens. Alongside air quality, care and access, the booth underlined cybersecurity as a key concern for the smart city resilience and therefore citizen protection. Again, SystemX was well suited to share its digital security research domain and field of investigation.

It is worth mentioning that the metropole of Lyon operates several urban systems (water distribution, waste management, traffic regulation…) critical for everyday urban life. Although these systems are not always visible to citizens, they are getting more and more connected, and therefore vulnerable to cyber-attacks. The connectivity is a real added value to smart city implementation as it fosters data cross fertilization. The metropole of Lyon implemented a proactive data strategy : providing a single publicly run data platform that provides access to over 1000 sets of qualified and reliable data, from local public and private partners. Different licenses were designed to regulate the reuse of strategic data and build a trustful environment. For the last 2 years a specific focus was made on personal data management to ensure privacy and citizens’ empowerment on data. As another example of SystemX contribution to this goal, the BWM (Blockchain Wallet de la Mobilité) project is an innovative step forward powered by blockchain to the current deployment of a citypass giving access to public and private services to Lyon inhabitants.

Singapore: The 1st Smart Nation in the world? 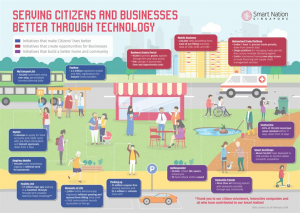 This tremendous initiative is headed at the highest level of the government, and financially supported by a significant budget. If we only consider the scope of Research and Innovation, where stands SystemX, 19BSG$, that represent more than 12 Mds€, are dedicated to the digital transformation of the country in a 5 years plan. This has to be compared to the Horizon 2020’ 5 years budget of 80 Mds€ for the whole of European Union.

This transformation is focusing both on the public and private sectors, with all governmental bodies involved in order to financially contribute and set the pace for all key involved players coming from business, research, innovation, and public bodies.

If you go one step deeper into the objectives, you will find the same topics as in most other big cities.

Part of this massive transformation is Mobility, supported by the Smart Mobility 2030 Strategic Plan [7]. This is where SystemX came into play in Singapore, starting in 2018. SystemX came to Singapore in order to join the 1stworldwide project to build a center of excellence for the certification of the autonomous vehicles (AVs), namely the CETRAN (Centre of Excellence for Testing & Research of AVs – NTU) project. This is a flagship project for Singapore, willing to set worldwide standards for the development of AVs in megacities. In cooperation with its main partner, the Nanyang Technological University (NTU), SystemX is bringing its expertise on simulation and modelling in AVs to Singapore, together with French key partners, Renault, SNCF, Systra, and AV Simulation [8]. For SystemX, it is a highly competitive challenge, and also a way to cooperate with some of the best players in the world, be it from academia or industry. It opens new doors of development for the IRT and its human resources.

In addition, SystemX develops contacts in other industry sectors within this Smart Nation, including energy, logistics, or cybersecurity. French companies are also part of this momentum. To name a few, Airbus, Thalès, ENGIE, EDF, PSA, Bolloré, Blue Solutions, Systra, Alstom, Safran, SopraSteria and many others use Singapore as an R&D platform to build the future of their business in Asia.

As artificial intelligence is becoming a more and more key enabler, SystemX is also looking at partnering with academia on this unlimited chapter. NTU, NUS, A*STAR, or SUTD, are among the world best ranked academic players to do so. This is also a way for SystemX PhD students to spend time abroad in competitive research teams and bring back new expertise to France.

To sum up, Singapore appears like a living lab where the world is coming to explore, innovate, and test technological solutions that will later on benefit to other countries. It is clearly the place to be for an Institute like SystemX and we see no limit to this cooperation.

If one tries to compare two cities like Lyon and Singapore, one may realize that key topics are very similar (mobility, energy, security…). However, the approach used to tacklethese issues might be different.

Lyon and its surrounding suburbs was the first area to be granted the full status of French metropole in 2014. It acquired the largest set of competences a French public organization can get, after the state. As a city-state, Singapore gathers even more prerogatives, and hence long tem responsibilities.

One example is water. Singapore has been dependent from Malaysia since before the creation of the country (1965), with 2 long term agreements signed in 1961 and 1962 to supply Singapore with water. One of these agreements ended in 2011, and Singapore managed not to renew it by putting in place the NEWater programme, focusing on recycling and desalination of water. This is a key milestone in Singapore independence and sustainability.

The metropole of Lyon doesn’t need to bother much with foreign neighbour. However, it dedicates a lot of attention to protecting its citizens, and settles himself as a leader in strengthening people’s data , against the private digital champions. A pre occupation widely spread in Europe.

In the end, megacities share a lot of concerns in order to improve their citizen’s lives. They address these issues according to their own culture, priorities, and skills. Comparing their strategies, methods and have them cooperate will allow fastest and innovative ways to progress. This is why SystemX is present in Singapore and Lyon: think out of the box and be humble and curious about what other players develop elsewhere. 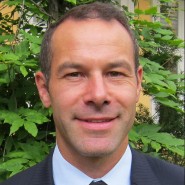 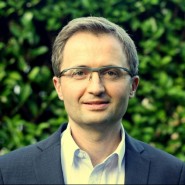